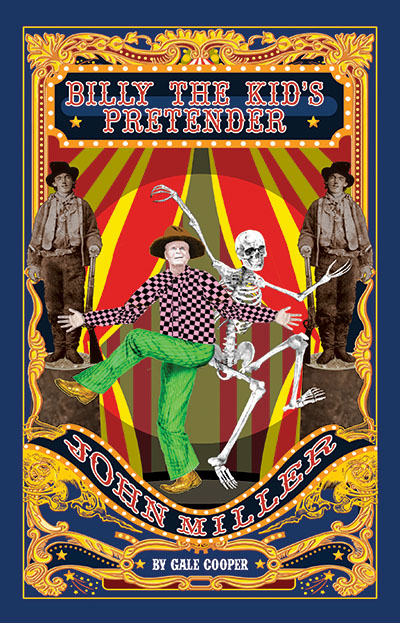 This book exposes John Miller, a minor 20th century Billy the Kid imposter, who gained publicity by being exhumed for DNA fakery for the gigantic 21st century “Billy the Kid Case” hoax.

All the Billy the Kid imposter hoaxes of the 20th century are ridiculous because of contorted fakery trying to escape the documented fatal shooting of Billy Bonney by Sheriff Pat Garrett on July 14, 1881. From delusional and exhibitionistic pretenders to their profiteering authors, they were an unpalatable bunch, exploiting public ignorance and foisting antiquated outlaw mythology of “Billy the Kid,” mouthed as pseudo-memories.

Old-timer Billy the Kid pretender, John Miller, was different. He skimmed a few fictionalized books from the 1920’s, used fables circulating about the Kid’s outlawry, sewed himself a hat like in Billy’s tintype, and hinted to associates about being Billy.

What justifies writing about him at all, is that, 66 years after his 1937 death, he became key to the gigantic “Billy the Kid Case” hoax. Blocked by me from Billy’s and his mother’s graves, the perpetrators were desperate for DNA of any Billy the Kid claimant for this profiteering publicity stunt. So, shielded by New Mexico’s corrupt governor backing the hoax, its perpetrators dug up John Miller for no reason other than TV cameras, and destroyed his remains for meaningless DNA extractions. This criminality was topped-off by grave-robbing his underground neighbor, random man, William Hudspeth, for more bones.

So this is a tale of non-entity, John Miller, who, after death, had the potential to topple New Mexico’s then 139 year old racketeering Santa Fe Ring. I wanted to give him the chance.