The Lost Pardon of Billy the Kid:
An Analysis Factoring in the Santa Fe Ring,
Governor Lew Wallace’s Dilemma,
and a Territory in Rebellion 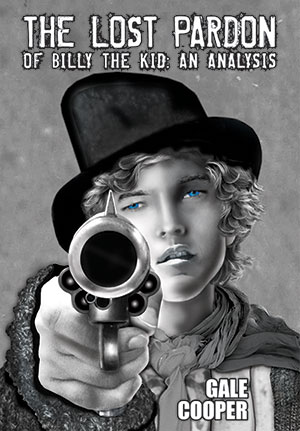 The Lost Pardon of Billy the Kid analyzes Billy the Kid’s pardon request for his Lincoln County War indictments in the context of New Mexico Territory’s revolts in the 1870’s against expanding domination of the Santa Fe Ring, and Governor Lew Wallace’s dilemma that pardoning Billy would result in Ring revenge destroying his political future. The unjust outcome was the outlaw myth of “Billy the Kid,” created by the Ring and Wallace to hide the Ring’s crimes of land-grabs, malicious prosecutions, and assassinations. This is Billy the Kid history with a new revisionist perspective which finally does justice to Billy Bonney and his fellow Lincoln County War freedom fighters.

A complex question in Old West history is why William Henry “Billy” Bonney aka Billy the Kid was not issued the pardon for his three Lincoln County War murder indictments, which he believed New Mexico Territorial Governor Lew Wallace had promised. The results of that lost pardon were tragic: his hanging trial, jailbreak murder of two deputy guards, and killing by Sheriff Pat Garrett.

Implicit are related questions. Had the pardon promise been real, or merely Governor Wallace’s trick of wording? Or had Wallace reneged? Or had Wallace yielded to corrupt pressures? Was a pardon deserved? Did Wallace have power to grant that pardon? Did Billy fulfill his side of the pardon bargain? Why did Billy’s lawyer never make a formal petition for pardon to Wallace? Who were the pardon’s opponents? Were others pardoned by Wallace for their Lincoln County War indictments? Could the Secret Service also have pardoned Billy? Why did Billy risk a pardon rejection, when simply leaving the Territory would have ensured safety? Were others secretly involved in seeking Billy’s pardon? Why did Billy testify in a Court of Inquiry against a military commander, separate from the pardon bargain? Why has it taken so long to sort the facts? Should there be a posthumous pardon for Billy the Kid?