Blandina Segale,
the Nun Who Rode on Billy the Kid:
Sleuthing a Foisted Frontier Fable 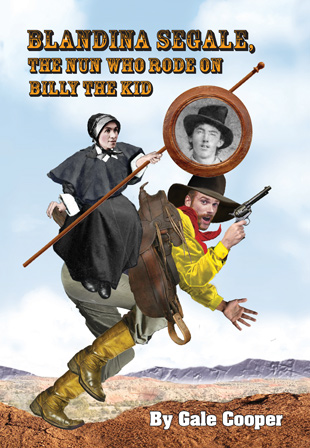 The Nun Who Rode on Billy the Kid: Sleuthing a Foisted Frontier Fable is an exposé of the longstanding published claims that 19th century Sister of Charity nun, Blandina Segale, befriended the outlaw, Billy Bonney, known as Billy the Kid. Analysis of those claims reveals that no such relationship existed; though some have postulated that Sister Blandina did know a Colorado highwayman named Arthur Pond aka Billy LeRoy. But did Blandina, now being considered for sainthood, willfully perpetrate the first and strangest Billy the Kid hoax? And if she did not, who perpetrated the hoax in her name?

To answer these questions, this book’s research and analysis takes a fascinating journey through Blandina’s Old West journal, which became her book, At the End of the Santa Fe Trail; through the Sisters of Charity archives; and through the life history of little-known outlaw Billy LeRoy – all against the backdrop of the burgeoning print and film mythology of the real Billy the Kid, and the temptation to ride on his famous coattails.

And the now stakes are raised because Sister Blandina Segale is in the running for sainthood.

The only certainty I had from the start was that her book’s claims of criminal depravity of her “Billy the Kid” had severely damaged the true history. And the current media thrust, with a TV series, was flooding the public with her throw-back fakery to the original lurid and prejudicial Billy the Kid press and outlaw notoriety.

I have made it my task to protect Billy Bonney’s history by exposing Billy the Kid hoaxers. My book, Billy the Kid’s Pretenders, Brushy Bill and John Miller, came out in 2010, exposing those two mentally disordered old men - both posing as Billy the Kids who survived Pat Garrett’s shooting - who had acquired hoaxing authors. And in 2014, was published my Cracking the Billy the Kid Case Hoax: The Strange Plot to Exhume Billy the Kid, Convict Pat Garrett of Murder, and Become President of the United States - about a forensic DNA hoax, which was a throw-back scam, using illegal exhumations, with intent to claim that Oliver “Brushy Bill” Roberts was provable as Billy the Kid.

Then, in 2016, I first read on the internet about a 19th century nun named Blandina Segale, whose Old West journal was published in 1932 as a book titled At the End of the Santa Fe Trial. It achieved multiple reprints largely because of her surprising tales of befriending an horrific, scalping murderer, highwayman outlaw she identified as “Billy the Kid.” Her current fascination arose from announced progress in her sainthood petition, bestowing saint-and-sinner allure to her frontier gambits with “Billy the Kid.” She already had one TV program from the 1960’s, and another was now in the making. I smelled another hoax.