With New Billy the Kid Letter Authenticated by Gale Cooper 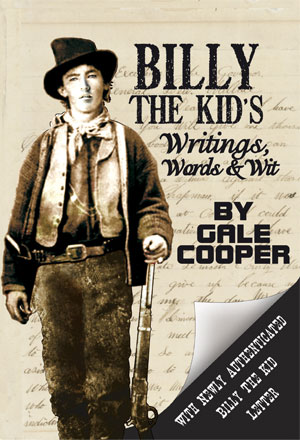 Billy the Kid’s Writings, Words, and Wit validates revisionist history of Billy Bonney as a Lincoln County War freedom fighter against the Santa Fe Ring. Presented are his total writings and recorded words - including archival copies of all his letters - which demonstrate his intellectual brilliance and his pardon bargain with Governor Lew Wallace, who betrayed him. Billy Bonney left his words in an affidavit, a deposition to a presidential investigator, a possible Lincoln County War “Regulator Manifesto,” pardon pleas and other letters to Wallace, an interview recorded by Wallace, testimony to a military Court of Inquiry, a letter to an attorney about his hanging trial, newspaper interviews, and recorded reminiscences of his contemporary advocates. Added is a new Billy the Kid letter authenticated by the author, which further establishes his quest for justice in the Lincoln County War against the Santa Fe Ring, and its head, Thomas Benton Catron.

Revolutionary uprisings yield heroes and villains because historians may be the second oldest profession, catering to victors. One such victim is Billy Bonney, made infamous by his enemies as “Billy the Kid;” and still lurching between personas of illiterate homicidal outlaw or literate freedom fighter.

As Billy’s revisionist historian, my focus is on New Mexico Territory’s robber barons, who killed him to conceal their crimes; until his glaring fame exposed them as the monstrous Santa Fe Ring: spawned in his lifetime and continuing to ours. Fittingly, Billy’s own writings and words vindicate him from old mythology and historians’ conservatism, while exposing the political rapacity and hypocrisy of foes that that set his fate.